For the first time since last Summer, I met up with my son and his family for a glorious walk in the sunshine. There are still frosts every morning and a nip in the wind but the weather was just right for walking.

Click on any photo to see it full screen.

We met in Hilton. You can find the walk on the Dorset Life website. 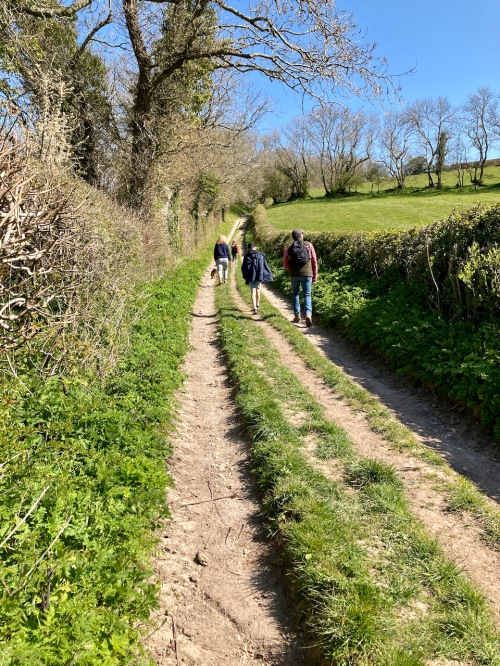 Quite a gentle uphill walk to get to the ridge from where we could see for miles and miles.

It was the first time I had met their 6 month old Border Terrier, Haggis

She is standing by a trough which I had to photograph for Cathy cos I know how much she likes them.

Ahead was our picnic spot. 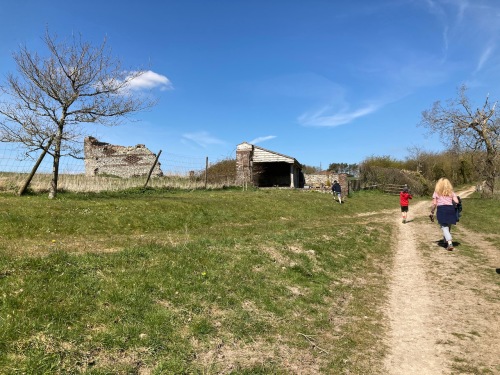 A shelter made in memory of Mark Batchelor who died aged 32 in 2007.

The boys were intrigued by the little bits of memorabilia left on a shelf in the shelter, and we wrote in the Visitors book.

After lunch we set off again through woodland 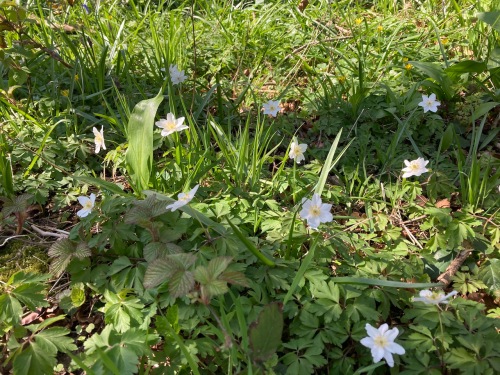 Little Bro collected wild garlic and was fascinated by the wood anemones.

Then out across the ridge and down into the valley 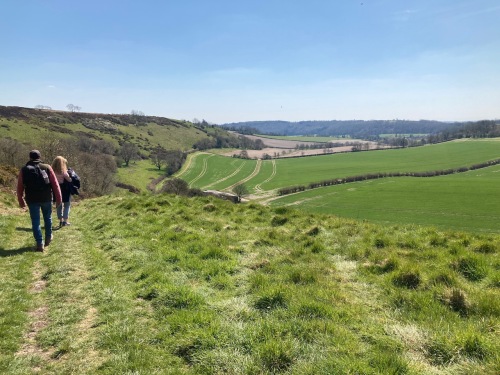 There is something so refereshing about being up high and looking out across the county – deep breaths of clear Spring air certainly recharges the batteries. 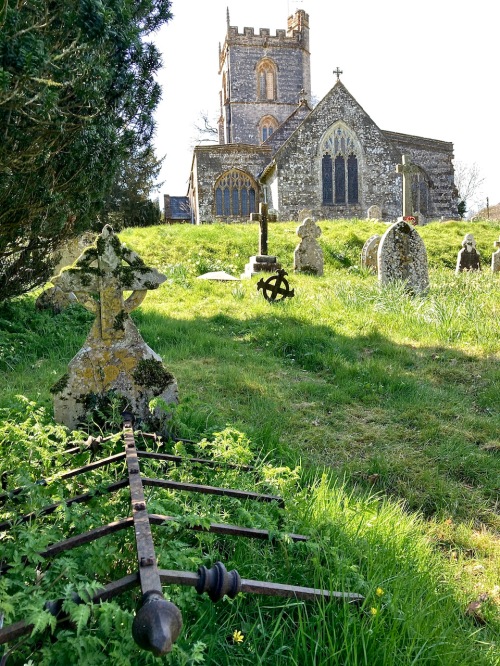 and found this rusty iron headstone – how pretty

If I were to be buried, my daughter suggests ‘Rust in Peace’ as my epitaph!

And enjoy the peaceful interior 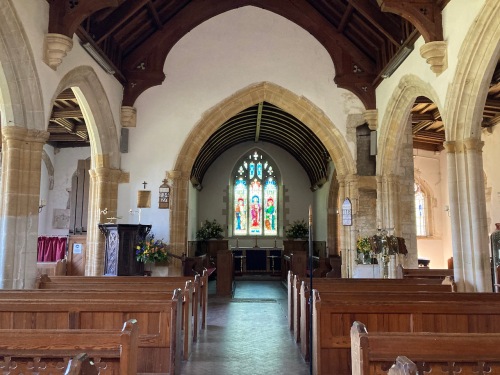 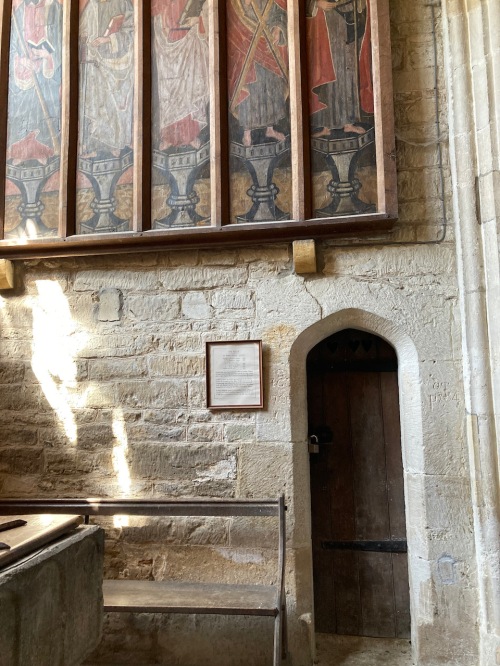 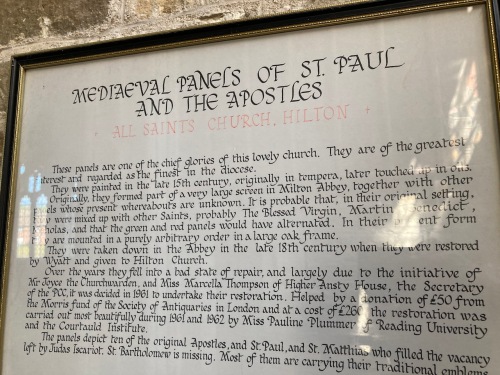 Just as I was leaving I noticed this piece of modern stain glass hanging from the ceiling. I do love to see modern art in churches 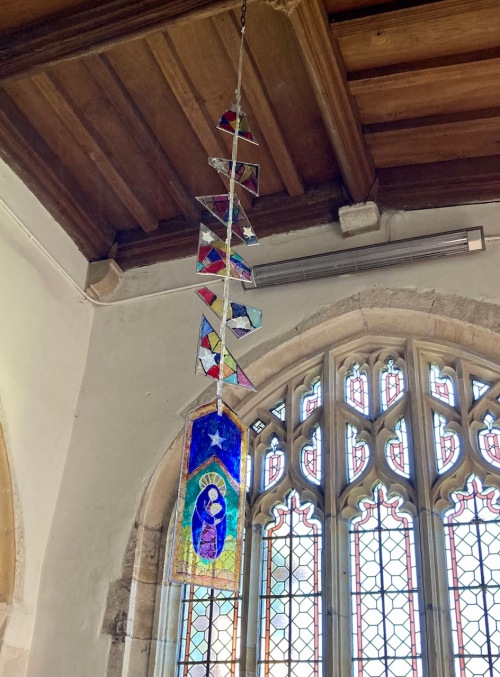 On the drive home I passed the rather spendid Milton Abbey, which is now part of a private boarding school 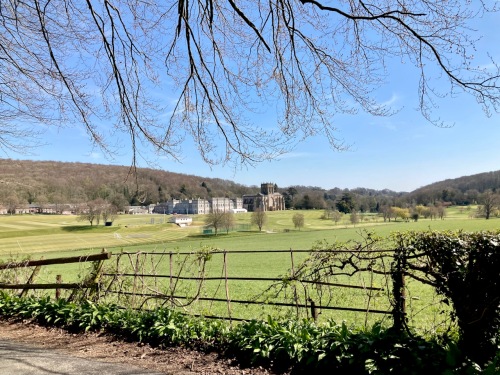 I got home just in time to watch the funeral of the Duke of Edinburgh.

I am ambivalent about the place of Monarchy in our modern society, but there was something about this pared down ceremony to honour a life, on the whole, well-lived, that I felt I wanted to watch, to mark a point in history.

I hope you are having a happy weekend whatever the weather in your corner of the globe. xx

“She did what she could”

About 20 years ago my Mum and I visited the lost village of  Tyneham – we used to love looking at Epitaphs in graveyards. I did this with my Grandad too, we were interested in the history and making up stories about the lives recorded. Mum said I learnt to read from the gravestones. Apparently I insisted that she helped me to sound out the words of the epitaphs, and I’m still fascinated.

Twenty years ago, we found the gravestone of Priscilla Styles. The wording must have been much easier to read then, as I’m sure I would not have spotted it today. I had remembered the inscription as ‘SHE DID WHAT SHE COULD’.

I have thought about her often in the last 20 years and now with the help of the internet I could find out a little bit of what it was she did:

1861: Priscilla aged 3, her father died in Pimlico, London. According to the Census, it seems that she then went to live with her maternal Grandmother in Swanage.

1871: aged 12, she ws living with her Grandmother in New Road, Swanage

This is a photo on the Worbarrow information board down by the bay. I’m sure Priscilla and/or all or some of her children must be in this picture. Her daughters would have been 13, 11, 9 and 4. I’d love to know which ones they are.  As far as I could tell there is nothing left of these cottages now.

I would so love to be able to share this with my Mum, she is 86 and has Alzheimers and would not have a clue what I was talking about. My Mum is Welsh and known as Mamgu (mam-gee, with a hard G), Welsh for Granny. Miss E says she thinks “Mamgu’s brain has fallen over sideways”, a good way of putting it!

I am still intrigued to know more about what prompted the words on Priscilla’s epitaph and why she died aged 44. I wonder if I will ever discover more.

If you would like to know more about Tyneham, there are quite a few You Tube clips with interviews of the villagers and walks round the village.

……..having walked to the beach and climbed the cliffs we went back through the woods to the village, now mostly in ruins (the story of Tyneham) 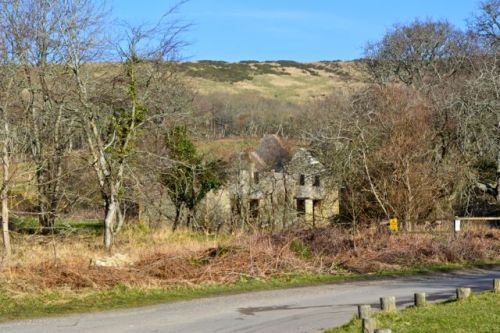 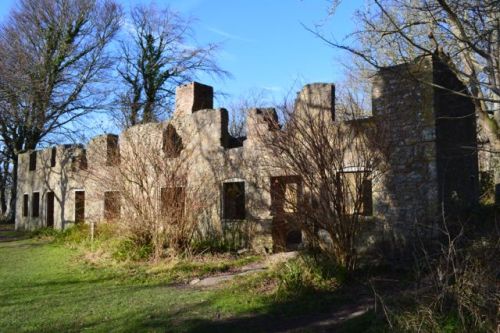 here is the old Rectory with its abandoned gardens – croquet on the lawn anyone?

We could imagine the vicar walking to church past his ponds, and wondering if he and his wife planted the snowdrops. 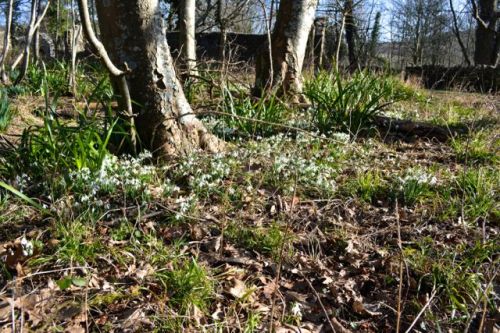 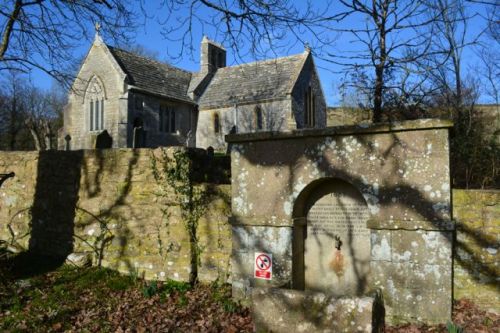 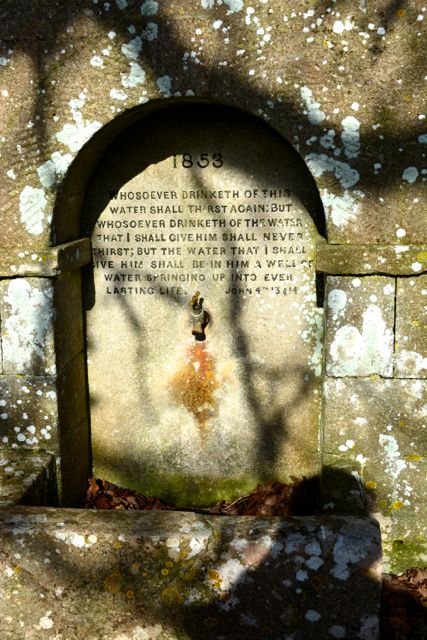 and then this oh so cute kneeler. 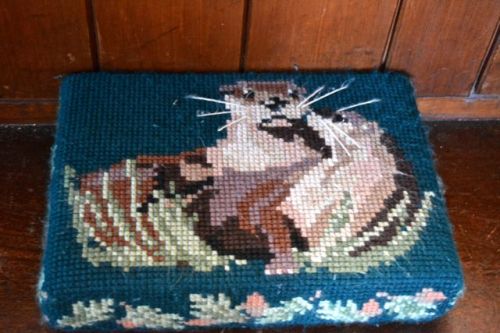 Priscilla Styles, died in 1903, aged 44. The inscription actually says “She hath done what she could”. I was so pleased to find her again! (With the wonders of the internet I have since been able to find out a bit more about what she did – more of that another day).

a page from the teacher’s diary 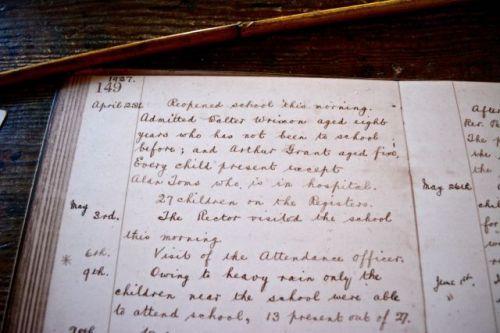 and empty coat pegs in the entrance. 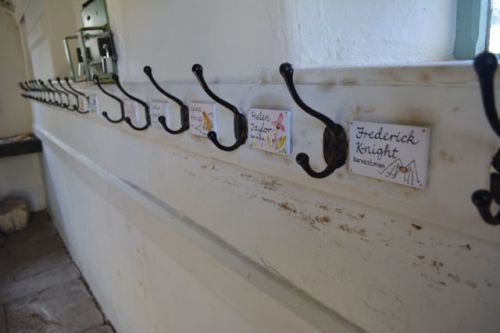 Such a strong mix of thoughts and emotions, mingling with ghosts and memories of a small, fairly isolated, busy seaside community. It is a peaceful setting on a sunny day, surrounded by beauty, a really fabulous place for a walk or a picnic – but for us a delicious pub lunch

at the Weld Arms in East Lulworth, sitting out in the sunshine on a Sunday in February    ……………..      and home to watch a wonderful sundown 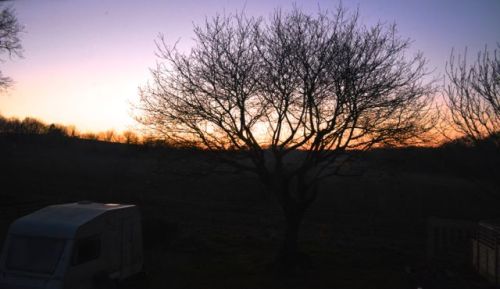 from my bedroom window, feeling full of gratitude for where I live.

From Dorchester, my friend and I walked across Grey’s Bridge  – that is an egret you can just see, standing at the water’s edge – I must get a better zoom lens! – and then along a path by the water meadows 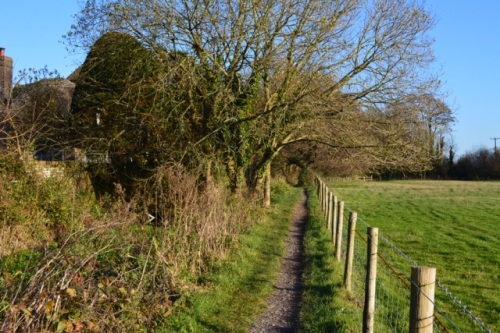 to Stinsford Church, where a cosy entrance invites you in …. 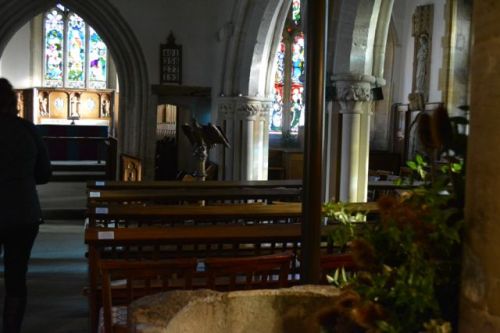 Thomas Hardy, one of our most famous local authors, went to services here. To say my friend is a fan of Thomas Hardy is an understatement! And she is very knowledgable about him, telling me little anecdotes along our walk – she told me he used to sit in the seat just below the ornate plaque in the photo below, which is on the left of the aisle as you walk in.

This is the gallery above the entrance, where the minstrels would have played before the installation of the organ.

We both love to read epitaphs (you can see more in the slideshow of the Ringstead walk ) and see another Dorset Church on my Stourpaine Walk.

and I’m always interested to see the needlepoint kneelers, all those hours of beautiful handwork

and an urn that looks to me like a Nursery Rhyme King with moustache, sitting at the gates to the graveyard 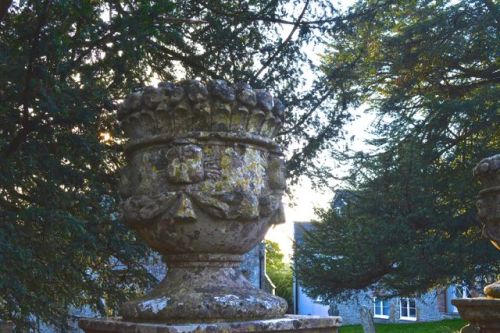 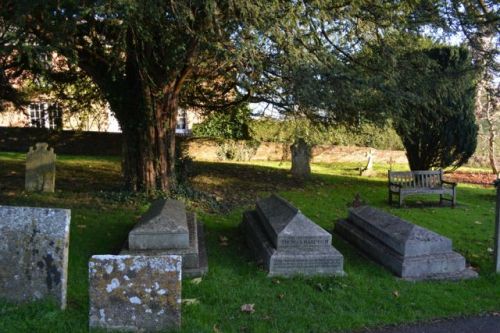 his ashes are in Poet’s Corner in Westminster Abbey

heading towards Bockhampton ………. (to be continued)

For anyone interested in following Hardy’s footsteps there are many wonders to see in and around Dorchester, go to the Tourist Information Centre and pick up a Hardy Trail Guide. A must is the house he lived in, Max Gate, which is opened by the National Trust from April to October. And also Hardy’s Cottage, Thomas Hardy’s birthplace, nestling at the edge of Thorncombe Woods, a great place for a woodland walk.

“A Pair of Blue Eyes” by thomas Hardy is being serialised on BBC Radio 4 Extra a the moment :  http://www.bbc.co.uk/programmes/b007jphk

Join me on a Winter Solstice Walk 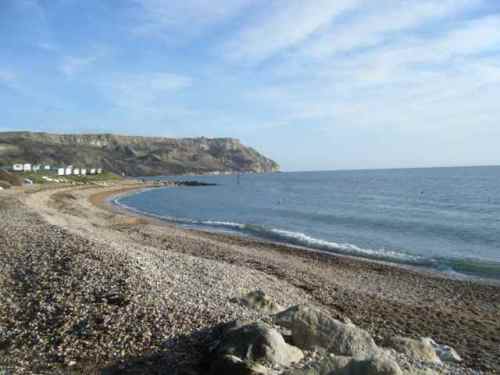 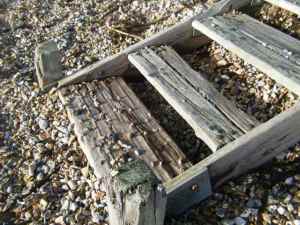 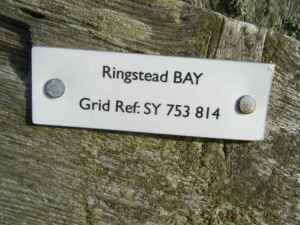 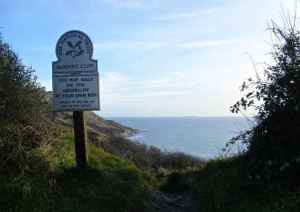 along the beach and up the hill

Seeing the houses perched on the cliff and then to St.Catherine’s Chapel, and Granny-by-the-sea.

When my children we younger we used to walk here and they had to find Granny-by-the-sea before we had our picnic.

the view from Granny-by-the-sea, looking towards Portland.