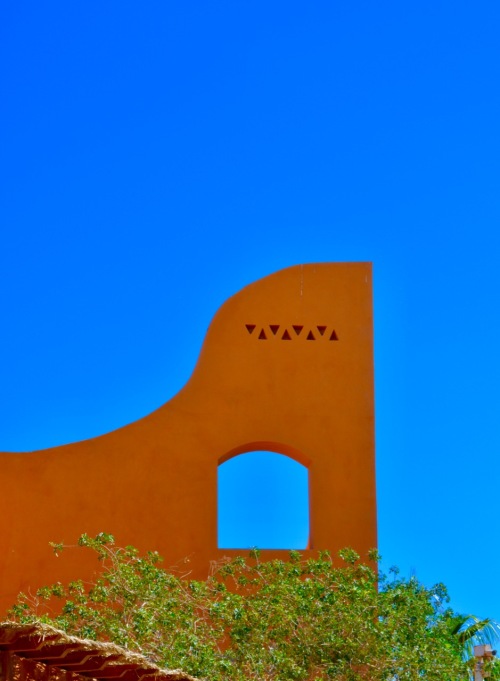 Ooof! Don’t you just love the terracotta against that amazing sky.

For my last post about my trip to Egypt, I bring you some Egyptian windows 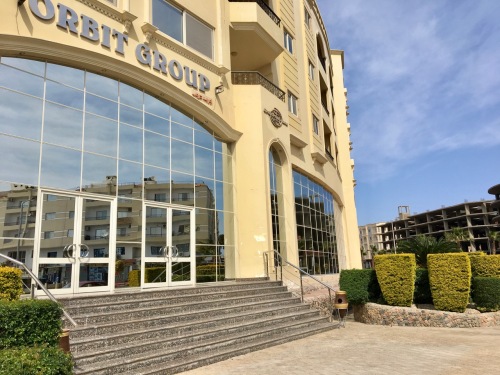 We went in search of an art gallery, but the only one we found was closed. 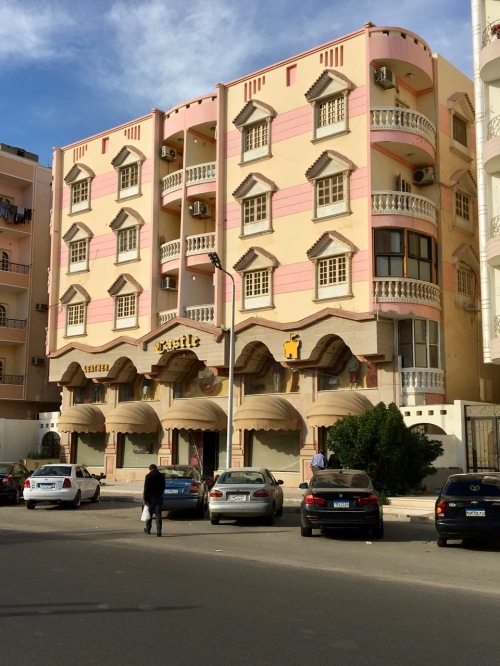 I was surprised to see so much English signage in Hurghada.

What windows you have found to share with us this month?

I’m looking forward to seeing them. Please leave a link in the Comments below.

Egypt: in search of shells 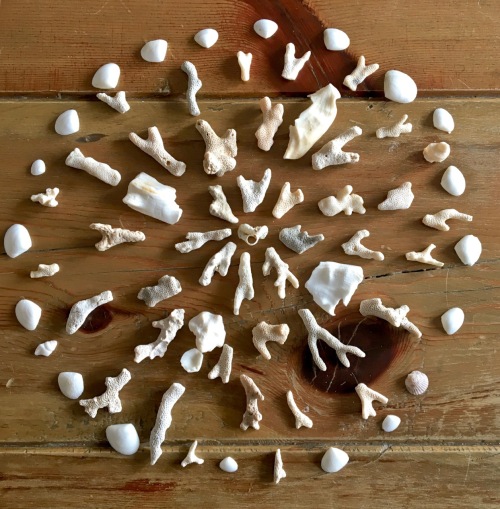 Of course I went beachcombing whilst in Egypt – I was hoping to find more material and inspiration for some Silly Saturdays, sadly there were very meagre pickings. I did find these few pieces of coral and small white shells

on the little beach near the villa 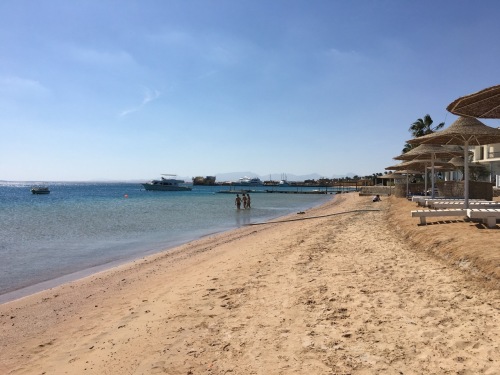 which I wandered along each morning (it was only warm and windless enough for me to swim there once). Most beaches are private, or have been snaffled by large hotels. We did make our way to a fairly newly built resort a few miles out of town, but shells – there were none.

The resort was a bit of a ghost town as tourism has been much reduced since the terror attacks as recently as 2017.

and a fun piece of sculpture 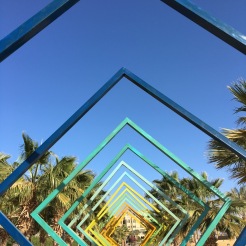 on a lovely walkway.

And turning the camera dial to ‘Sketch’ mode 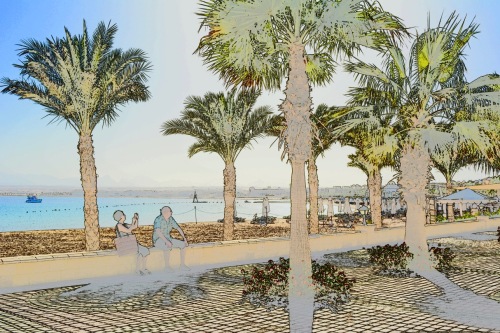 We sat and had a couple of drinks in the fading light and returned to the villa.

Hurghada and its surrounds are full of contrasts – massive riches and beauty live directly alongside desperate poverty, squalour and rubble.

One day we walked from our lovely enclosed villa complex 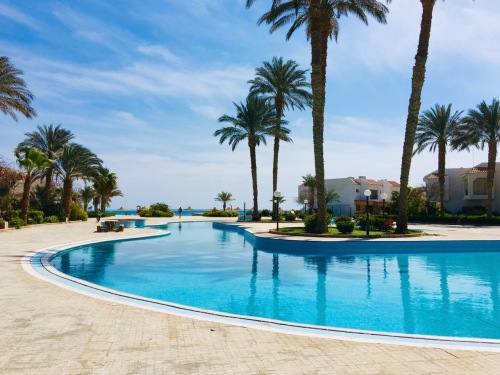 with its pool that was much too cold to swim in, to the marina at the luxury Marriot Hotel.

One of the first things to notice is that there are so many buildings that are only half built. Something to do with the laws that means one has to build on land in order to own it, but then the building is left unfinished and can sit there like that for years.

Some buildings were being worked on and I was fascinated by the medieval looking scaffolding on which men were walking around carrying buckets of stuff with them, no harnesses or safety equipment at all.

I could not take a photo of the men as if you show any interest at all in anything you are at once pounced on for money or people trying to sell you something – there is no possibility for relaxed window-shopping here!

On finished buildings some of the details are quite beautiful 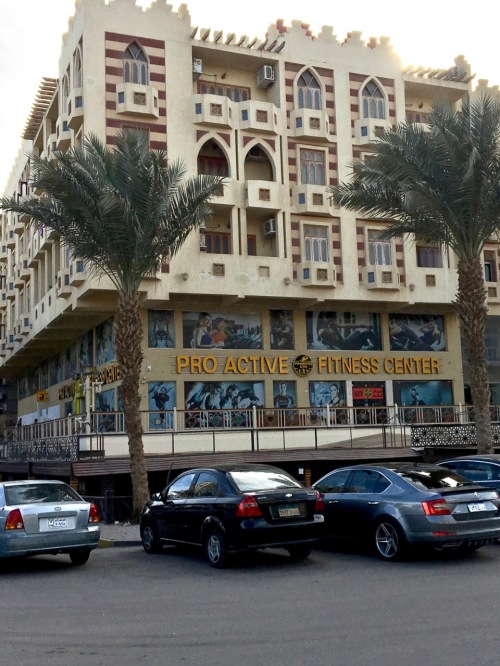 Even the paving, although rickety and often dangerous has pretty elements of design 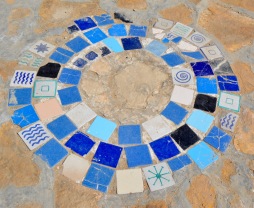 You had to keep your eyes to the ground as suddenly there could be a few inches of metal pipe sticking up through the pavement for no apparent reason. 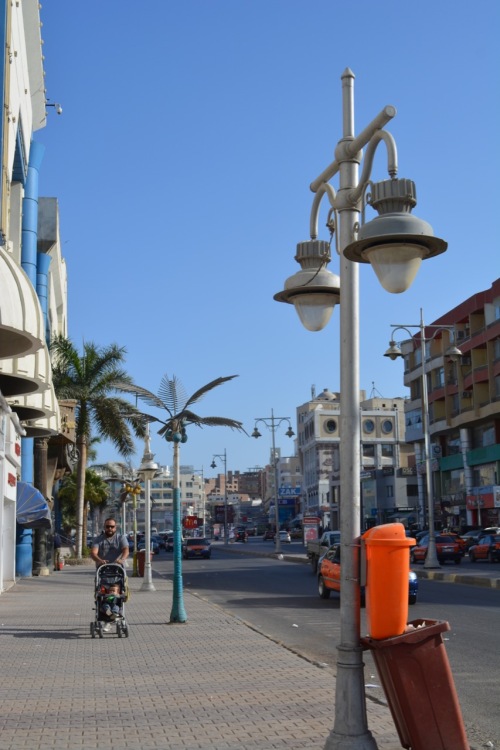 and the occasional majestic statue.

The friends I was staying with in Hurghada, Egypt, run a diving business there, BlueOTwo. Any diver’s dream is to dive in the Red Sea and there are masses of diving companies there operating there. Some of the British women divers have made their home there. One such woman, Denise, now runs The Purrfect Cuppa Cat Cafe,

which is a wonderfully welcoming meeting place for locals and English speaking others alike.

There are masses of cats everywhere in Hurghada and Denise takes them in, neuters and vaccinates them, makes sure they are healthy and gives them a place to call home.

There are cat toys, cat beds and little cat cubby holes inside and out where cats can feel happy and safe

Some of the cats find new homes this way.

There is also a crafting corner

where every Thursday and Sunday people gather to craft together, sometimes somebody teaches a class, other times people just work on their own project and chat. Some work is for sale with a percentage going to help with cat welfare.

My friend and I went along, as you know, crafting with a group of women is right up there in my top ten ways to spend quality time. 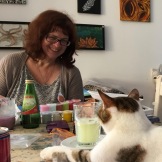 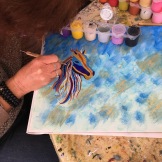 After crafting we all had a delicious lunch together.

A wonderful way to spend a few hours learning more about life in Egypt and swapping art and craft tips.

The first thing I notice in any new place is the colours, designs, textures and textiles – like this gorgeous cushion in the villa where I was staying in Hurghada.

I’m assuming this is a chain stitch done with a machine – do you think so?

And I would have loved to have brought home some of these mandala decorated ceramic bowls, but I didn’t think they would survive the trip

So I contented myself with having my breakfast muesli in them each morning.

Just look at the colour combinations in this woven table runner 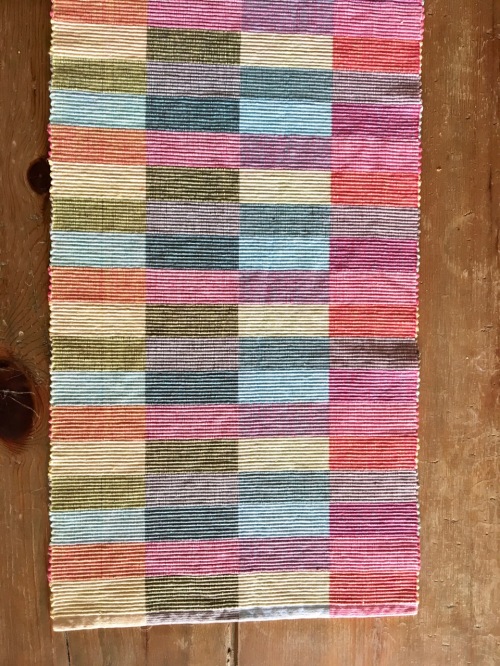 I have a bit of a thing for zebra stripes at the moment, and would love to be able to carve out some time for making more collages

Here is one of my own zebra doodles

Don’t be surprised if you see more in another post – as another mini-obsession takes hold.

There is inspiration for doodling everywhere you look – even tiles in a public toilet! 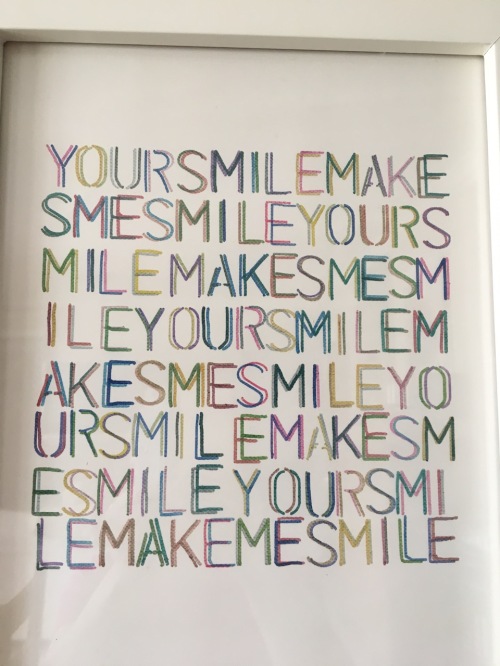 I’m thinking it would be a fun on a Never Ending card, like the ones I made here and here

My friend and I went to the shop that sold the ceramic bowls, Wood U Like

The wooden cabinets were made of a wonderful jumble of decorative wooden off cuts. And although I did not particularly like the style of the bags, I loved the combination of needlepoint on canvas, with leather. I have lots of needlepoint I don’t know what to do with – so maybe they could be turned into bags …. hmmmm – now to find somone who works with leather. 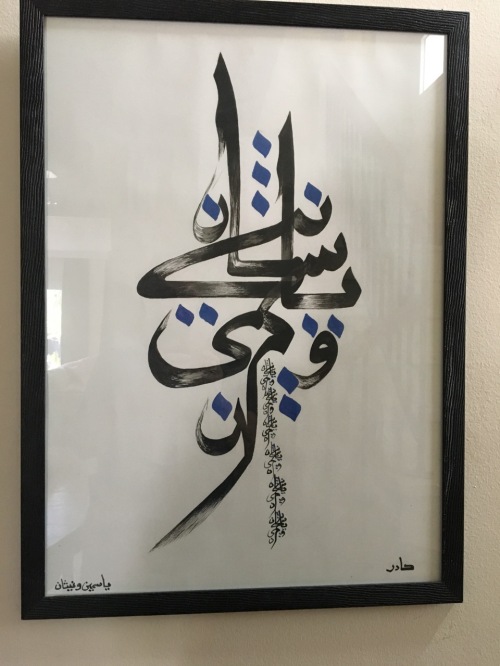 Apparently the meaning it conveys is something to do with love – but I can’t remember exactly what. (I have just sent a message to my friend to ask her and will edit in the meaning later)

The picture above is a screen shot from Google Maps.

In 1995 I had one of the best holidays of my life when I went on a Nile Cruise with the mother of a school friend of my daughter. We did not know each other very well but we were both single and we agreed that if we did not get on, neither of us would have lost a friend, but if we did get on, then we would both have made a friend. We got on really well and had a wonderful time. We did the tourist tours of temples and tombs and drifted down the Nile each night, watching the life of the river banks slip slowly by whilst sipping cocktails til dusk – it was bliss.

I hope you won’t be disappointed to hear that there will be no tourist tour pictures from this trip. No pyramids or temple paintings. I stayed with friends who run a business in Hurghada, and I was happy to fit in with their daily life and chillax.

Even so there were preparations to be made:

Then toe nails – ha! I don’t usually bother with nail varnish but I had visions of lying on a sunbed on the beach gazing past my smooth legs and pedicured feet to a serene turquoise sea – turquoise is a great colour to show off a tan – so I treated myself 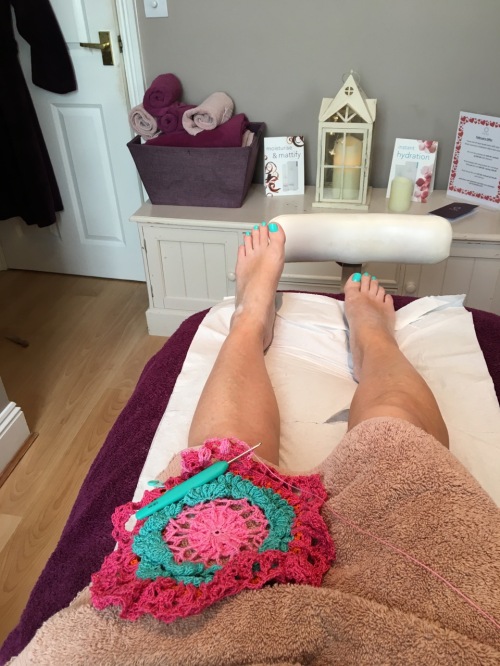 at Pure, in Dorchester.

How wonderful it is to be pampered sometimes – sitting there waiting for the varnish to dry, dreaming of sun-drenched beaches and making a mandala, was one kind of heaven for me.

And now for some new sandals 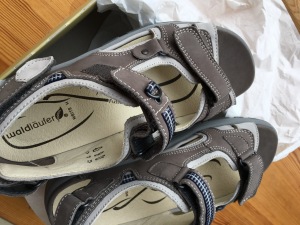 to go on those newly spruced-up feet. Of course I had to make them mine

and add a bit of colour (with Sharpie pens)

I might add more later, but for now, they were just right

Our plane from Gatwick was delayed for about an hour, which gave me some crochet and ‘people-watching’ time 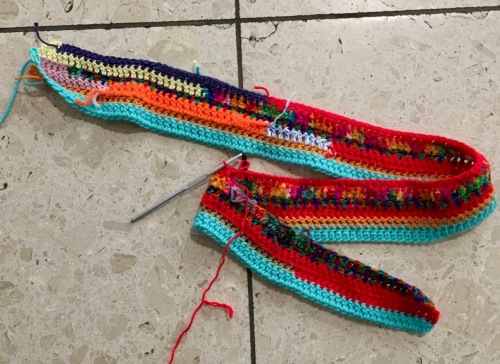 I took this picture as a ‘before’ to see how much mindless crochet I would do in a week. Just rows of US dcs (UK tr): I can do this whilst chatting, watching TV and even walking along. I’m using a 5.5mm hook and scraps of yarn of all thicknesses tied together with a reef knot. I will leave the knots and ends on show as a design feature. The crochet hook passed through security no problem – both ways.

As we flew over icy mountains

I was happy listening to Pick of the Week, and a Play on my iPad and doodling

until we were coming into land over the desert 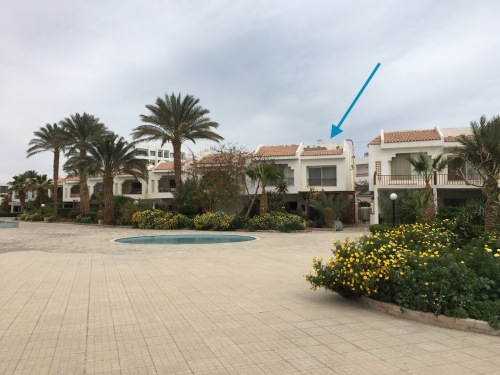 As you can see, not quite the clear blue skies we were all expecting 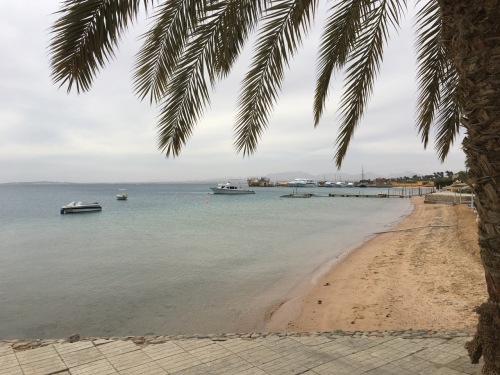 There would be no lounging about on a sunbed here!

Or swimming in that icy pool 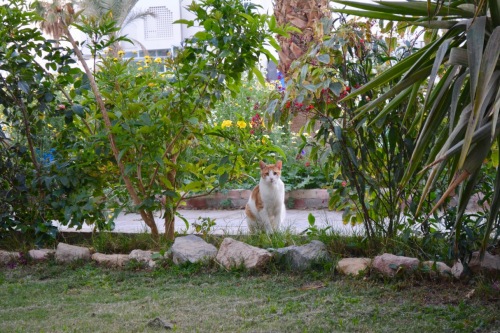 but more of them another time ……

Tagged cat, Egypt, plane, sketch book, travel, villa, what to do on a plane 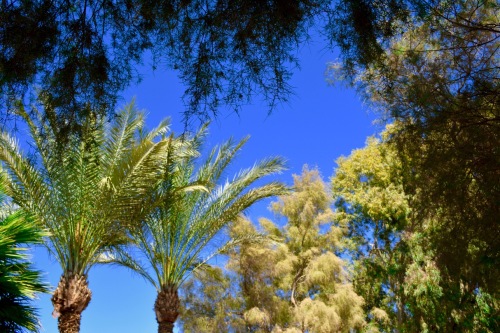 Posted on 10th Mar 2019 by Wild Daffodil in travel