In a Vase on Monday: Altered Art 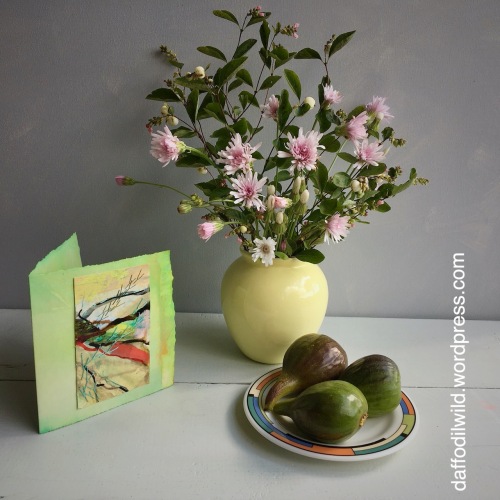 In my vase today is a posy of Pink Dandelions, thank you so much for the seeds Cathy, they are such gems! And twigs of snowberry bush, well that’s what I called it as a child, don’t know its proper name.

These were picked to accompany a card and three figs from my fig tree, for a dear friend, for her birthday. I also gave her a book, ‘Waterlog’ by Roger Deakin, which I forgot to take a photo of. She loves swimming, in fact she was a swimming teacher and taught all my children to swim.

She is an artist and I absolutely love her sketches and paintings, but she often struggles to like them herself. She tore up one of her paint sketches and gave me a piece folded over into a card for my birthday in November, I tore it on the fold line and did some stitching to make a card for her.

Then I took some of the paper I coloured with Koh-i-Noor, watercolours,

looking for colours that would make a good background

I chose this one

It took her a little while to realise it was one of her painitngs. I think she liked it.

Do you have any blooms to pop in a Vase this Monday?

Joining Cathy at Rambling in the Garden.