Some progress has been made on the book cover started last month.

It has fabric from old clothes and curtains, some from the 1970s.

The white lacy daisy is from a dress I had when I was 17, the stars are from holey old jeans that Miss E (14) has grown out of. I love them sitting close to each other in this piece.

This project is a lot of fun.

The inspiration comes from “The Magpie’s Nest”

a course by Aimee Irel Bishop

I have started another, which I have made in a different way. 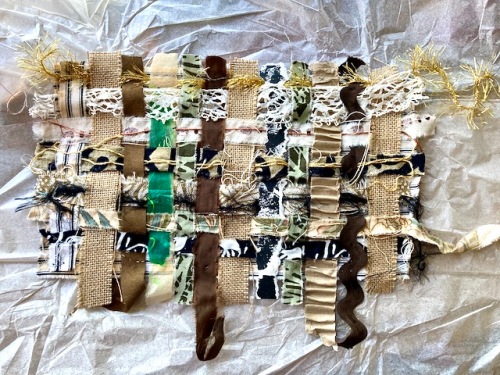 This time, instead of cutting slits in the base fabric, I have laid strips on top of a piece of fabric to act as the ‘warp’. I tacked then down along the top edge and started weaving.

There is more to do.

Joining Kate and her happy band of Scrap Happy contributors.

Red Henry: He has tales to tell and the scars to prove it.

I have had Henry with me for about 30 years, a lot has happened in those 3 decades. He finally needs to go into retirement and be replaced with a younger model. I just could not bring myself to take him to the dump – he holds memories – how ridiculous to have a sentimental attachment to a gadget, but he’s seen me through some tough times.

I asked Miss E (8) to think about what we could do with Henry, and she came up with the idea that he could be used to hold toys for Little Miss M (3), “because she would love to push them around” – and I do believe she would!

So after a bit a a clean he has taken up his new post as a toy carriage. 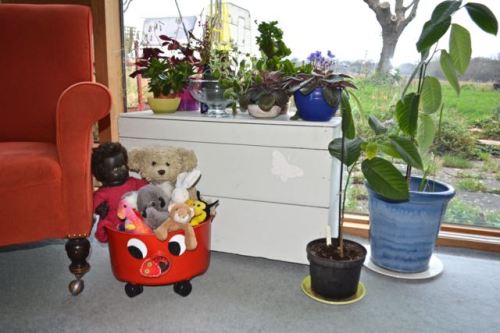 And if that doesn’t please Little Miss M as much as we think it will – he can be used as a moveable plant pot holder for the heavy blue ceramic pot holding a custard apple plant that I have grown from seed.

One of Henry’s Tales:

Cue wobbly camera effect as we go back to circa 1989……..The day was fraught with my 11 year old middle child (!) being very annoying. He was pretty cross with me for leaving his Dad, and I was pretty cross with him for being bolshie. We were all struggling to adjust to the new situation. We lived in a town at that time and were planning to go shopping, he was refusing to come with us. In the end he persuaded me to leave him at home – we only planned to be about 45 mins so rightly or wrongly (wrongly as it turned out!) I decided I could really do with a break from the arguments and took the other two with me.

The three of us were wandering peacefully along in the pedestrian shopping street when a bike came up beside us very fast and screeched to a halt! It was middle child looking terrified – he garbled, without drawing breath “I wanted to be helpful, so I thought I’d lay the fire but it caught alight and I tried to put it out but it made a mess so I vacuumed it up and now the vacuum cleaner’s on fire!!!”

“Ok,”I said, “we will all go home” (I could be very calm in a crisis in those days) and he took off on his bike. We hurried back to the car park and drove home.

When we arrived, I was relieved to see no flames licking the roof, only an ashen faced boy holding on tightly to his bike standing at the gate waiting for us.

Opening the door I was greeted by a hideous smell, a mixture of burnt plastic and human hair (a lot of hair seems to be vacuumed up in our house) have you ever burnt hair – it smells DISGUSTING.

But no smoke and no fire! Phew!

Luckily the smouldering pieces once inside Henry’s belly had seemingly run out of oxygen and although they had burnt through the dust bag and a made a small hole in the canvas dust bag cover, 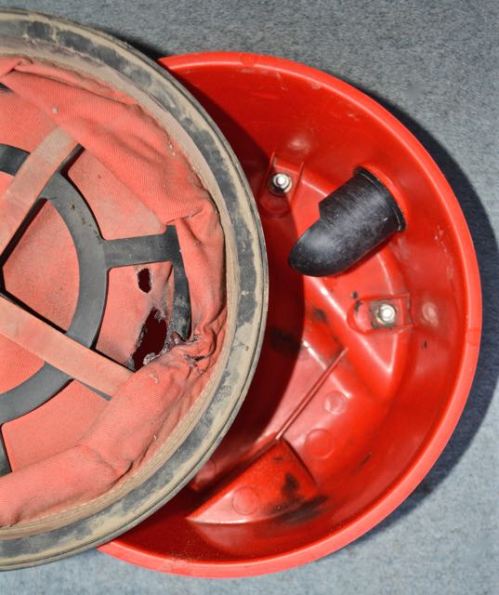 and some scorch marks on the inside, no further harm was done and Henry still worked perfectly well, and soldiered on reliably until just a few weeks ago.

On the plus side – middle child was quite subdued and beautifully behaved for the rest of the week, returning to his more natural good humour and playfulness.

with charm and a certain look

with a charming look

These are definitely Haibun this week: story summed up with a haiku

And the new Henry seems to be settling in nicely

Joining in with Ronovan’s ever expanding band of Haiku Challengers. Prompt words: CHARM and LOOK

Bluedaisyz Challenge is coming to an end. 😦

A few of us have enjoyed it so much we have been chatting behind the scenes and hopefully there will be some exciting developments to tell you about next week. 😀

The photo prompt for next week is: